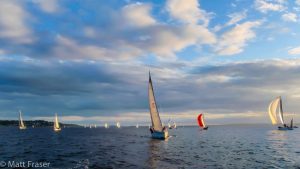 February saw the last race of the 2017 – 2018 Snowbird sailboat race series. While the 2016-2017 series experienced gale for winds and torrential rains during several races, this year was comparatively pleasant with decent weather and winds each race. During the post race events at Ray’s Boathouse the skippers all expressed thanks and said the courses were set perfectly for the conditions.

I want to express how grateful the race committee is to Jerry Hillis. Jerry has faithfully offered his boat as the committee boat for many years and is the pillar our races are built on. Thank you for all that you do for the races, Jerry!

Thank you to the following people who set up the courses and ran race starts this series:

And, of course, the wonderful people who worked on the committee boat. Without you no race could be successful! In no particular order, thanks to: 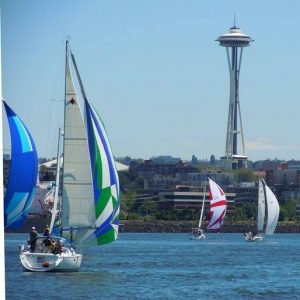 Dedicated to raising funds for research to combat blood cancer, the Leukemia Cup Regatta is a fun way to get you and your friends out on the water.  Since 1998 $30 million has been donated to research facilities at the UW and Seattle Children’s.  Survival rates have climbed 2-4x for many blood cancers through the research that has been enabled.  The Leukemia Cup Regatta itself has donated $2.4 million in Seattle and $62 million across the nation to combat blood cancer.

48° North is bringing together yacht clubs all along the Puget Sound region to create an event designed to get people out on the water sailing through the Washington Sails event on July 7.  Washington Sails will be set up for brand new sailors and existing sailors who are curious about racing to learn the sport in a low pressure environment.  Sailors will learn the basics of racing without getting into the technical weeds.  Along with the training there will be a sailing component where sailors will put their new skills on display in a low intensity race.  SBYC will be working with CYC to coordinate activities in Shilshole Bay.  We would like to have a few boats from SBYC in attendance to represent the club.  If you are interested in joining the activities as a trainer or skipper please talk to Ben Lobaugh.