Cruising Season has begun!  Damn the weather, full-speed ahead! 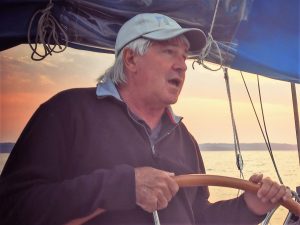 Many of us enjoyed gathering at Bell Harbor Marina last weekend, with some having come by boat, while others joined in for a Saturday night dinner via the more mundane land-yacht transport mechanism. A good time was had by all. AND, we inducted our newest new members to the Club – Tom and Julia King, who came to the event in their J-Boat (no landlubbers, these folks).

Tom and Julia had heard of the infamous SBYC chicken, and were treated to a close examination of the two chickens currently in my possession (the badly damaged Pirate Chicken recently having been retired in favor of the new “clucker,” a mean and lean specimen in possession of all limbs, but devoid of elegant decoration, so far). During the induction I pointed out that some of us believe flying the SBYC chicken from the flag halyard is an honor, rather than a badge of shame. It’s all a matter of perspective.

We are very pleased to welcome Tom and Julia to the Club. They work regularly on Tuesday evenings, so you may not see them at very many Dinner Meetings, but look for them at this season’s cruise events. Yellow Fest is April 18th and Burger Burn happens May 20th – let’s be there in force!

At our March Board Meeting, the new rates for Dues and Initiation Fees presented in the February Rudderpost were unanimously passed. These rates, however, will not take effect until January 1, 2020. They are:

These modest increases are needed for continuing financial health of the Club, given various rising costs.

There will be no April Board Meeting. Both the Commodore (myself) and the Vice Commodore (AJ Mallory) will be out of town. The Board decided we will be best served to stay in touch in early April via email, agreeing that we will attend to any necessary Board decisions at the May meeting.

We’ve been asked by the Des Moines Yacht Club to announce their annual Marine Swap Meet on Saturday, March 23rd from 7 a.m. to 2 p.m., held at their Club building at 22737 Marine View Drive (next door to Anthony’s Restaurant at the Des Moines Marina). While the swap meet is free, anyone wanting to sell things must pay a fee for a specific space (call Todd at 206-400-7282) or visit desmoinesyachtclub.com.

The “big one” in terms of swap meets is the annual event hosted by Fisheries Supply at the north end of Lake Union. This year’s event is on April 6, officially starting at 5 a.m.. At this one, the early bird not only gets the worm, they get the best deals on the best stuff.

One of our club’s primary goals for 2019 is to bring in new members. Despite being in existence since the 1960’s, SBYC is a relatively small group of dedicated boaters. To add to our membership requires some proactive effort. At the Board level, we have a team dedicated to developing some new ways to tell our story to more boaters and hopefully attract more new members. Ben Lobaugh, Anne Girvin, AJ Mallory and I have been working on this. One of those outcomes you can see described here in this Rudderpost – the new “SBYC Sails (and Ales)!” event. Another plan this group is putting together are a series of “Walk the Dock” events, followed by a barbecue. Anyone and everyone is welcome to join in on these.

Telling the SBYC story to those who might be interested in joining us is something each and every Club Member can do. Yes, for some this feels like “Sales”, which for some is either a very scary proposition or an activity performed only by people with ulterior motives, sneaky personality traits, or a tendency to tell something other than the truth. Having been in sales almost my entire working life, I do appreciate that this isn’t for everyone, at least not as a job. But, like the flying chicken, it really is a matter of perspective.

What we want to do is let other boaters know the things we find fun and enjoyable about being a member of SBYC – for example, great relationships, fun times together, reciprocal moorage, help and support with boat problems/questions/issues. And it’s important to mention that this is entirely voluntary and comes at a very low cost. But rather than “sell” this kind of thing, the easier and more effective mental stance on it is to simply provide information to those who might be interested.

So how does one tell if a boater you meet might be interested? First, have a conversation. Ask about their boat, their family, how they enjoy boating, what boats they have had, etc. In other words, get to know the person(s) a bit. If they don’t seem like our type of folk, then don’t go into the Club story. But, if they are decent, normal, good people (most boaters are), then follow those questions up with one like “have you ever been involved with a boating club?”

Note the words “boating club”, as opposed to “yacht club”. The connotation of a “Yacht Club” is usually one of rich people in blue blazers charging around in their mega-yachts, acting like they are a notch above the rest of us. And, of course, these rich folks pay enormous money to belong to such blue-blood organizations. This is the common perception in most people’s minds about what a yacht club is all about. Little wonder that people don’t more actively pursue getting information about a yacht club in their area, with the notion of potentially joining one.

Our mission is to counter such misperceptions. And there is no “sell”. It’s just a conversation about who we are, what we like to do, the real economics of it, and then an invitation to check us out by coming to an event as our guest. If you think about it, this is exactly how most of us became aware of SBYC, and then joined the club.

If you would, please think about the other boaters you’ve had some conversation with at your dock or  know through other friends and family. Then make a point of weaving a little bit of SBYC into your next conversation with those people. Heck, maybe you start by telling the story of the silly Commodore of this club you belong to, who has this silly rubber chicken he flies on his flag halyard quite regularly. Blue-blood? I don’t think so. 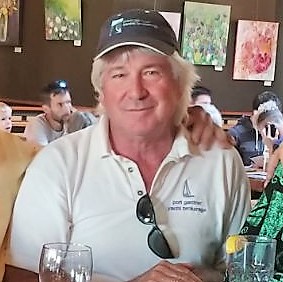