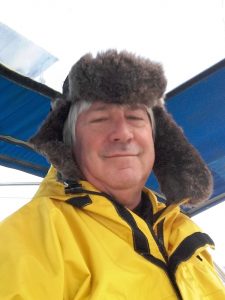 Traditions are a wonderful thing, especially when there is boating involved.  Like hunting Easter “eggs” on the beach at Blake Island or chasing the Christmas Ship in December.  One of our favorite boating traditions is going to the Husky football games by sailboat.  Julie and I are part of a 6-person group who make the trip to all Husky football home games on the good ship “Mary Ann, »  a late-seventies Newport 27 owned by our illustrious skipper, Doug Brown.  Doug is the original and only (so far) owner of this fine vessel, with a majority of her service being to transport this bunch to the docks at Husky stadium.
The renovation of Husky Stadium a few years ago caused a season full of games to be played at Seahawks Stadium.  We still went to the games, but it felt weird.  Our tradition had been interrupted.  When Husky Stadium re-opened, the marketing department made quite a splash (and still does) with the tagline of “welcome to the greatest setting in college football”.  In fact, there is only one other college football stadium – Tennessee – where fans can come to the game by boat.  I’ve seen it – the Tennessee River runs alongside their stadium.  It ain’t no Lake Washington.  With Mount Rainier and Mount Baker book-ending the beautiful Cascades that surround our expansive lake, this is truly an amazing setting for college football. 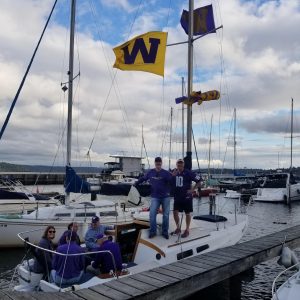 These days, Mary Ann is moored at Leschi, so earlier this season we got to see Ken McKenzie and Ben Lobaugh work with the Footloose sailors as they wheelchair to their sailboats (like the Catalina Capri our club helped purchase) and then leave for a glorious day sail on the lake.  We have even seen Ken’s fine vessel, the Scotch and Soda, there and can vouch for it being afloat, alive and well at Leschi.
Our transit to Husky Stadium takes about 40 minutes.  We’ve had excellent weather this year, except for the most incredible thunder/lightning storm in Seattle history at the night game that was suspended due to the weather, then re-started at about 10:45.  We bailed out, heading for home in the dark just as the game resumed.  The Huskies lost that one, so it was just as well we weren’t there for the finish. 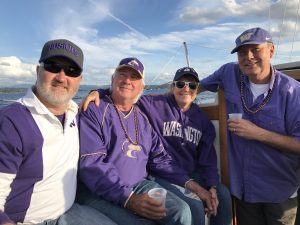 Of course, a great part of the tradition is the food and drink.  Sometimes we bring a crock pot full of just-cooked chili – still nice and hot.  Smoked salmon, outstanding single-malt Scotch, good beer, and terrific sandwiches are just a part of the regular fare.  We are “sail-gaters” and have the hats to prove it.

Visiting guest “sail-gaters” are always welcome.  Find us along the shore side dock at the north end.  We’re the only sailboat crazy enough to get in there, with all the eel grass and shallow water.  But, we are the intrepid crew of the Mary Ann.
It’s a great tradition at the greatest setting in college football.  Come ‘sail-gate’ with us! 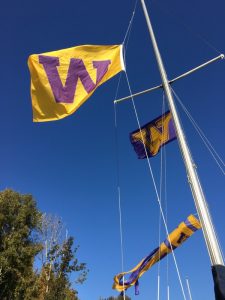