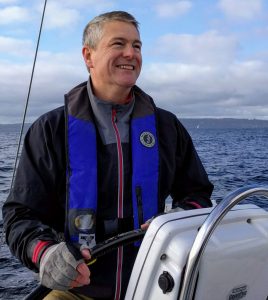 As cancellations of social activities pile up, our club is no exception. The board and I met virtually this past Tuesday and added Burger Burn and our April and May Dinner Meetings to the pile. We also came to the difficult decision to cancel the caterer, band and venue for the June Dinner Dance. We still have the reservation for dock space at the Kingston Marina for June 12 and 13 and are hoping we will be able to be together by then. However it will not be our traditional June Dinner Dance. If restrictions are still in place, we will adjust the reservation with the marina to another date. So, watch the RudderPost and the events page on our website (https://shilsholebayyatchclub.org/events) for updates about the June dates.

As I hope you have all seen, we have been holding some Virtual Happy Hours via Zoom conferences and expect this to continue with a couple of additional events scheduled. The next Virtual Happy Hour will be held when our April dinner meeting should have occurred: Tuesday, April 21st at 6:30pm. We do the same in May on the 19th at 6:30pm. In addition there will be one on Friday, May 8th at 5:00pm. Hope to see you there. Because the RudderPost is published publicly we are not able to post the connection details for these events here. Please check the General Channel in our Slack Space for those details. If you need assistance in connecting with Slack or help with Zoom you can contact me, Ben Lobaugh or Nancy Kick for help. Here’s a link with details for joining and Slack (https://shilsholebayyatchclub.org/slack).

Also, the Zoom meeting that we have been using for our Happy Hours is always “open”, so if you would like to use it to meet with SBYC members outside of the times we have scheduled, it is available to you. To use it just find the invite that I have sent out and click to join the meeting.

At this time it looks like it could be a grim season for boating. I’ve been trying to sort out what all the COVID-19 restrictions mean for us boaters, and the answers are as clear as mud. One of our local cruising guides has recommended no boating and another has been compiling a list of what’s open. On the surface it seems like boating is a good social distancing activity, until one starts thinking about the situation where a boater needs help. Then the boater risks exposing themselves or their rescuers to COVID-19. I’ve heard there was an incident in the last week of a boat running aground and requiring assistance.

The Canadian border is closed and San Juan County has closed all marinas to visiting boats. San Juan County has also closed all state parks and DNR land. The theory and fear is that boaters will bring COVID-19 with them into the islands and overwhelm the very limited health care facilities there. I’ve also heard this is a concern for the small towns and island communities in BC.

As I write this, in anticipation of nice Easter Weekend weather, the city of Seattle has closed 15 large parks that are on the water including Golden Gardens, Gas Works, Seaward, Carkeek, and Green Lake.  The list didn’t include Blake Island and I’ve heard boats are allowed to use park buoys.  The Blake Island Marina, however, is closed with a boom across the entrance and all park facilities (like restrooms) remain closed.

So, it’s unclear: local sailing and cruising might be OK but certainly heading north isn’t an option. Be smart; don’t take actions that will put you or others at risk. We will get through this!

SBYC’s Board of Directors has cancelled all cruise activities until July, at this time, to cooperate with the State’s guidelines for reducing the spread of the COVID-19.

July and August cruises will be announced in May’s Rudderpost, if they are to take place.  In the meantime,  stay safe.

SUMMER RENDEZVOUS  Stuart Island – jumping off place for cruising in the islands.

What Came First – The Yellow or the Q?

Yellow Fest was started by friends of ours. The only way they could get all the co-workers on a raft-up was to call in sick. They also had Easter off, as a company holiday.

All the decorations on the raft-up were to be yellow – for daffodils, sunshine, Springtime!  Someone suggested that sections of yellow fabric could be hoisted from the masts. The idea was accepted, without the thought of the Q signal flag, traditionally signifying quarantine. (But hey, we called in sick!!)

Maritime history has the yellow Q flag signifying a request for Customs clearance to enter a port when free of disease, as opposed to the L flag stating the ship had disease.  Previously, in times of illness, the Q flag was flown to keep other ships away, or for quarantine. The term ‘quarantine’ itself is derived from the practice of the city-state of Venice during the Middle Ages. This quarantining required ships arriving from locations known to be experiencing diseases, such as the plague, to anchor or moor off the port for 40 days (quaranta giorni), so that any disease on board might run its course. (Thank you, Maritime Logistics Professional.)

Before the large international fleets created the signal flag alphabet, colored flags were hung from houses to indicate the presence of disease – Black Plague was Black, Cholera was Green, Yellow Fever was Yellow. (I know I found a reference for the colors, but I can’t find it now.  I may have the diseases/colors incorrect.)

Somehow, knowing the history of Yellow Fest, it is incredibly ironic that Yellow Fest has been cancelled due to a country-wide, nay,  global(!) quarantine.

So, we suggest that you get into the “spirit” of Yellow Fest: buy your 5 bottles, and have members of your household hide them, so you can seek.

We are well in our new home in Prineville Oregon. Dave has his shop up and running, and Sam is enjoying her commute from one end of the house to the other, passing through the kitchen for the requisite cup o’ Joe.  We look forward to the easing of the travel restrictions and visits from our SBYC friends. We hope you have some distancing raft-ups as the weather improves.

Signal flag “Quebec, ” called the “Yellow Jack”, is a simple yellow flag that was historically used to signal quarantine (it stands for Q), but in modern use indicates the opposite, as a signal of a ship free of disease that requests boarding and inspection.