Do you feel that? That springtime feeling is in the air! Spring officially begins on March 20th this year. Just a couple more weeks! I am looking forward to warmer, sunnier days.

Coming into springtime, your Board is hard at work figuring out how we can cruise together in a safe manner. Governor Inslee announced that our state has been beating the metrics needed to move to the next phase for a few weeks now, and over the coming weeks will be planning the next phase. Some folks in our state congress have hinted that the state may be reopened as early as next month!

I am grateful to hear how many in the club have been able to get the vaccination, but we still need to make sure that we are being as safe as possible. There are many in our club who are part of the vulnerable population.

You will hear more over the next few weeks on how we will pull it off, but we do have a great plan for getting together and seeing each other‘s faces in real life! I am very excited about the possibility of seeing you all again. I am so tired of zoom! Having the technology is great and it has been a blessing for the club, but it does not beat gathering in person.

Alix and I are still on the hunt for a boat. A few have popped up that are interesting, and one that we just barely missed out on that might have been perfect. We are very excited about cruising with family again this year and seeing you all in fun anchorages around the Sound.

The club still looking for a new treasurer. This is LB‘s last year as treasurer and we need someone to step up and fill the role. She has made it very simple to be treasurer and will spend the remaining months of the year training her replacement. If you are interested please contact anyone on the board.

Join us this month, on March 16th, for the virtual dinner meeting on zoom.

We will go “around the horn” and hear from everyone depending on how many guests we have; join early if you would like to chat more informally. 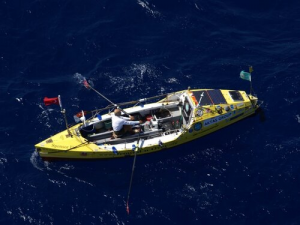 ERDEN ERUÇ (pronounced Air-den Air-rooch) is currently preparing for a solo nonstop row across the North Pacific Ocean from San Francisco to Hong Kong; planned departure date – April 22, 2021 on Earth Day; ETA – March 2022. During this historic mainland to mainland row in partnership with the Ocean Recovery Alliance, he will raise awareness about plastics in our oceans and carry beacons on behalf of Ocean Voyages Institute to tag for later recovery any ghost nets that he may encounter. He will set a half dozen records in the process.

Erden is a master outdoor athlete, accomplished ocean rower, adventurer, sailor and ambassador for the Ocean Recovery Alliance. He holds 14 Guinness World Records, is the recipient of the 2013 Citation of Merit from the prestigious Explorers Club and one of the 2013 Adventurers of the Year – “Nine individuals changing the face of global adventure” by the Outside Magazine. He is already listed in the 2009, 2012, 2014, 2017, 2018 and 2021 editions of Guinness Books of World Records.

Erden is one of the leading ocean rowers in the world today. He holds a 50 GRT Master captain’s license, engineering degrees and an MBA. He is also the founder of the Seattle based 501(c)(3) nonprofit Around-n-Over with a mission to educate and inspire children through human powered journeys.

Here are the 2021 SBYC cruise events and statuses as of March.  Due to the continued phase 2 lockdown and COVID-19 infection rates in Washington state, the Blake Island Yellow Fest cruise is cancelled.  We will continue to re-evaluate the cruise calendar each month based on the State of Washington COVID-19 phases and guidelines.

Once things improve, our first cruise may be something where we meet to anchor near each other, but not raft up.  Then we can ride dinghies around to each anchored boat in the group for short mingles and chats at a safe distance.

Hopefully we can have some regular in-person cruises later this year once vaccines are available to all, the infection rates significantly decline, and the Washington state guidelines allow for such events.

The March race is the last in the current Snowbird series! It has been a great series so far and I am looking forward to seeing everyone again for the final race.

February’s race was canceled, ironically, due to snow! Conditions getting to the marina were unsafe so everyone stayed home and played in the snow instead. Bummer to miss a race, but it was a good call for the safety of skippers and their crew.