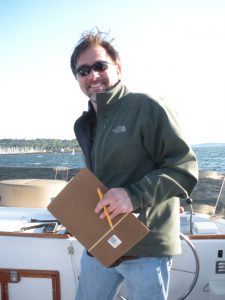 Fall is certainly upon us with the rains, winds, and shorter days.  With the rains we move to gather indoors again with our monthly dinner meetings that we resumed in September.  Attendance has been great now that it is finally safer to do so after years of pandemic restrictions.  We will continue to put safety first at the dinner meetings and expect attendees to be vaccinated and boosted, as we have for all our club events this year.  With cold and flu season also upon us, it is perfectly OK to wear masks at our indoor events when socializing.  With the Fall and Winter winds we begin our 2022-2023 Snowbird race series.  Sign up your sailboat to race in this series, join a crew, or help out on the committee boat.

It is also time for membership renewals for 2023.  We had some great events this year as we moved back to our cruises and dinner meetings.  We have another fun schedule planned for next year (see the cruise chair report below).  Don’t miss out!  Renew today so you don’t miss the December 15 deadline to get your information in the 2023 roster.  See the SBYC website to renew your information with multiple options on how you can pay your annual dues.  The club membership is expanding, and we want to see you all back again next year as members, officers, cruise sponsors, and volunteers.

The 2023 board elections are this month at the dinner meeting on November 15.  The Evite will be out soon from the Vice Commodore, if not already out.  We have a good slate of members nominated to take the reins of the board and committees next year.  Thanks again to Katie and the nominating committee for canvassing and identifying members to step up and help run the club next year.

I have been having a lot of fun on the board the past two years (and many years before that in various roles).  I did more SBYC cruises and events this year than I ever had done in a single year, and I plan on keeping that momentum going into next year.  I love our club, such a fine group of friends!

“I wanted freedom, open air, and adventure. I found it on the sea.” — Alaine Gerbault 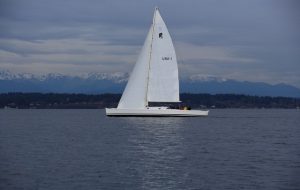 Topic: The building of a dream boat.

It is a bit difficult to know what is better; a warm but smokey late fall, or this week’s healthy air accompanied by wind, rain, and TV news mumblings of possible snow. In either case, my weekly visits to the marina are no longer to prepare for an afternoon sail, but instead to make sure nothing is leaking inside the boat.  So far so good, but my dehumidifyer is making strange noises and will not last much longer. Luckily a replacement is just a few clicks away. How did we live without internet commerce?

As a club we do have some winter activities to look forward to. The snowbird series ramps up soon, and the November dinner meeting is coming up on the 15th. We will join together at Ivar’s for a warm and dry evening of food, friends and a bit of club business. It has been fun working on presenters for our get togethers and since the December meeting is traditionally our Christmas event this will be the last talk I arrange. I think I managed to save the best for last.

Our Guest will be Kim Bottles who set out to build his dream boat in 2010. Kim has spent a good part of his life on Puget Sound waters and commuted by boat for years. He calculated he has crossed Puget Sound 7000 times! He has owned many boats, both sail and power. He enlisted his friend Bob Perry to help create his dream boat, a 62 foot daysailer. Mr Perry has designed a large number of boats, but is probably best known for the Valiant 40.  Kim utilized all local resources to design, engineer, build Francis Lee. He has agreed to help curate a slide show choosing from the thousands of images he has of the process of building this very unique craft.

Finally, our always organized Treasurer Rubie Johnson would like to remind you that the dinner meeting is a great opportunity to pay your 2023 club dues. They are $90 now, increasing to $100 if you pay after December 15.  If you prefer to pay by mail you can send yourcheck to SBYC, 2442 NW Market St, box 98, Seattle WA 98107. If you prefer an online option here is the link, https://checkout.square.site/merchant/030REXDQ9SATJ/checkout/4XYIISQ77GOTHPUVZD2SZ7RK

The 2023 SBYC cruise schedule is here.  Mark your calendars!  Most everything below is now reserved with marinas and facilities.  Only Labor Day weekend is too far out to book yet with the marina, but I will do so as soon as I can.  We can work out where we all want to meet for the summer rendezvous as summer draws near.

MAY 13 Burger Burn, Port Ludlow (sponsored by your name here)

Each cruise needs a sponsor to help organize and run the event. This really helps out the workload of the Cruise Chair and adds unique flair to each cruise.  I’ll volunteer to take Labor Day weekend and focus on that one, as I did not organize this event well the past two years.  Please contact me to sponsor one of the above cruises.

Our next cruise is not far off:  Winter Fest at Bell Harbor Marina in downtown Seattle February 17 and 18.  We have 10 slips reserved on C-dock.  You can now call the marina, tell them you are with SBYC, and reserve your slip.  And please sign up to sponsor this event!  Perhaps we can arrange a dinner in town.

It is time once again to pay our dues for 2023. A quick reminder that dues have increased from $85 to $90 for next year.  Also, this year the club will be enforcing a $10 late fee if dues are not received by December 15.  After December 15, you will not be included in the Roster.

If there are any significant changes in your membership information, please include that in the renewal documents or go online to ShilsholeBayYachtClub.org to the Member’s tab and fill out the Renewal Form to log in your changes.  If you would like an invoice emailed to you, check the box on the form, or send an email to Treasurer@ShilsholeBayYachtClub.org.

To be included in the 2023 Roster it is critical that dues be received by December 15.  You can still pay dues by mailing a check to SBYC, 2442 NW Market St. Suite Box 98, Seattle WA. 98107, or request an invoice by contacting the Treasurer. Your membership is important, and we all look forward to another fun and ‘adventuress’ year.

Did you hear the one about the Seattle yacht club that makes its members fly a rubber chicken if they forget to hoist their burgee at club events and cruises?

Ah yes, the famous rubber chicken with its long history of shaming sailors who dare to show up without that proud emblem that tells everyone who we are.

It’s hard to know where the tradition got started, but its significance is noted every time new members are inducted into the club. Although it started out as a regular old Archie McPhee type bird, it’s been decorated, dressed, disguised, and even hidden away, but it always comes back as “THE Rubber Chicken”.

But why fly a burgee?

How does pride and privilege work for you? The burgee is the pride symbol of a club. Most yacht clubs, if not all, have their own burgee and one can identify the club by its triangular flag. So, you can take pride in that red seahorse that centers our flag and quickly identify other SBYC boats whenever/wherever they display it.

The burgee’s “privilege” is when it’s used to procure other clubs’ reciprocal moorages—all of which require you to fly your burgee, giving you a night (or more) free from moorage fees.

But most of all you’d rather fly it than look like a jerk hoisting a rubber chicken up your mast! 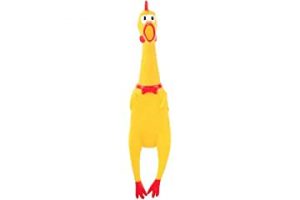 Do you fly your burgee even if you’re not at a club function? Olele sometimes does, particularly if we’re in waters where other club members might show up. It makes a quick ID if you’re looking for companionship. The Club is small enough now that we probably recognize each other anyway, but in past years that wasn’t necessarily the case.

One year in Desolation Sound we pulled into Roscoe Bay where an unfamiliar (to us) boat was flying the SBYC colors. We anchored, settled in, and later dinghied over to meet the couple who were strangers to us. We ended up spending a couple of days together with the guys going off to fish and bringing home some nice seafood. With Red Fish as entrée, dinner was a potluck affair, but SHE won the day when she introduced us to the absolute luxury of warm, freshly baked chocolate chip cookies on a boat! A first for us for sure!

A couple years ago (pre-pandemic) we were moored at Sucia when a dinghy pulled alongside and asked if we were really SBYC members.  Yes, of course, we said. He introduced himself as Dennis Johnson and said he’d been commodore of SBYC in 1980. Wow! Forty-two years ago! He now lives in Poulsbo.

On our first trip to Alaska, we were given a handful of burgees by the club to “donate” to various yacht clubs we might visit on that journey. Most yacht clubs with their own facilities hang the burgees from other clubs so, depending on your route to Alaska, you might see SBYC’s burgee at any number of clubs. It’s exciting to go into the Ketchikan Yacht Club and see our very own red, white and blue flag.

In short, when you fly the burgee, you’ll run into old friends; you’ll meet new people and some of them will be the nicest people who just might become your new BFFs; and you’ll save money on moorage.

Best of all, you’ll never be gifted with that awful Rubber Chicken.