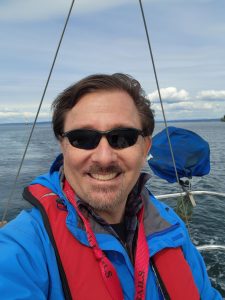 Wow, what a great summer of boating and cruising!  I loved seeing so many of you the past few months at many of the cruise events.  As summer transitions to fall we have one last cruise event at the end of this month, and we now resume our monthly dinner meetings.  Our Vice Commodore, Tom, is working hard to get us back to in-person dinner meetings. See his report below for details on that.  This is also the time of year that we begin planning for 2023.

We now have a nomination committee to enlist a slate of new board members for 2023.  The committee is reaching out to all members to select candidates for the open positions.  Please seriously consider doing a term on the board.  The club needs volunteers to step into these positions.  There is lots of help on the board and it is fun working together and getting all our club events planned and run.  If you haven’t yet served on the board as an officer or appointed position, please step up, share your ideas, and help us keep the club running smoothly.  It is really rewarding.  Believe me, this is my third time as acting commodore!  Over the years I have also been vice commodore, rear commodore, cruise chair, race chair, fleet captain, and webmaster.  Come join the fun. 🙂

An important position we need is a Race Chair.  If we don’t have someone step up for this role, then we will no longer be able to offer SBYC races to the club and sailing community.  Our current race chair, Ben, is happy to show you how to run and score the races.  Ben has done a fantastic job as our race chair for many years and now it is time for someone else to take this over.  The Snowbird series is a well-attended race series and represents a third of our club revenue.  SBYC is well-known for this racing series.  If we don’t continue these races next year, for the 2023-2024 series, we will lose this significant revenue and it will be extremely difficult to restart the series again with such a fully booked racing calendar in the Seattle area (over 400 races a year).  If we want to continue being a cruising club that offers some racing opportunities, we need to elect a new race chair as well as recruit some racers to join SBYC.  And who has not had fun on the committee boat, Olele?

I have found SBYC to be a wonderful, close-knit group of friends sharing this passion for boating.  It is a great club to make life-long friendships and create wonderful, shared experiences on the water.  I know we will adapt to changes over time, such as the impacts of the pandemic and the migration to a more equal mix of powerboats and sailboats, and we will figure this all out together as the club continues to evolve and grow.

“I can’t control the wind, but I can adjust the sail.” ― Ricky Skaggs

Tuesday September 20, at 7pm.
Place – TBD
Fall is here, and although the boating season continues with great weather, thoughts are turning to fall activities. This includes making plans to re-start our in person dinner meetings. Several of our group did some extensive cruising with great stories to tell, and I am sure all of us would like to catch up and share our life experiences over the last two years.  The September meeting will not have a formal speaker, to give us all a chance to get reacquainted.
Like many things in our world, much has changed in the dining industry. Costs are up, venues options are down, and those remaining are struggling to get staff. I spoke to one place that would only dedicate one server to our whole group, and several with prices at $70 plus per attendee. Ivar’s Salmon House is a viable option, although they seem to be dragging their feet a bit. Unfortunately, after a month or so of trying we have not yet been able to sign a contract for a September 20th event.
I still hope to set up a September dinner meeting, but it would be very helpful to get an estimate of possible attendees. This is in part because of increased minimum room charges, if we don’t have enough people, costs per meal go up! For this reason a preliminary Evite with a very short questionnaire was sent out late last week. This is NOT the official Evite to the meeting so I am not looking for a final commitment to the date, but you do have to choose if you are attending just to complete to poll. Please read the message in the Evite and feel free to let me know your thoughts in the comment section or at vicecommodore@shilsholebayyachtclub.org
Finally, the first person to guess the location in the photo gets a rubber chicken! 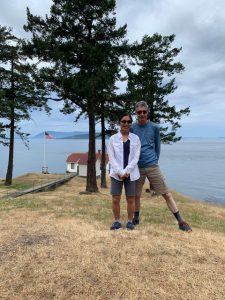 I hope you all had a great, safe summer cruising, racing, gunkholing, and any and all other forms of on-the-water activities.  Our last cruise of the year is the Salmon Bake on October 1st at the Des Moines Marina.  This location is easily accessible by land and sea.  As of this writing we have 35 people signed up!  If you are coming by boat, be sure you get your information to Sharon and Larry Clark, the sponsors of this cruise, so they can update the moorage plan.  The Salmon Bake will be on Saturday, with happy hour starting around 4pm and the dinner at 6pm.  Please follow the #salmon_bake channel in Slack for up-to-date information as we get closer to the event.

Since the last Rudderpost in May, we have had a lot of cruise events this summer.  The Burger Burn at Port Ludlow was a great event.  We had good turnout, and the marina staff were so friendly and helpful.  I hope we do another event in Port Ludlow.  We had a pavilion tent and grills to burn up all sorts of burgers, steaks, and other foods. We inducted two new members at this event, Brena and Shannon, who hosted a fun happy hour on their boat the first night.  The Saturday of the weekend featured a strong southerly wind that made some of the docks like car washes.  By the evening it had calmed down enough for grilling, Bocce ball, and croquet matches.

The June Dinner Dance, the Cha-Cha!, Ha-Ha! – A Caribbean Night in Kingston, was a huge success!  Roger, Julie, Jesse, and Harold did a wonderful job sponsoring and planning the event.  The décor and Mai-Thais were just perfect.  Harold’s barbecued shrimp/pineapple skewers with peach/mango salsa were out of this world.  It was great to be back at the Kingston Cove Yacht Club facility.  The KCYC commodore and staff were wonderful to work with and the food catered from the nearby Kingston Alehouse was delicious.  The Harry Castro Cuban band returned again this year to entertain us with their music and they gave us another fun dance lesson.  We also had a fun dock party on Friday afternoon in the wind and rain; all of us huddled under the picnic shelter on the dock with plenty of food to share and hours of great conversations. 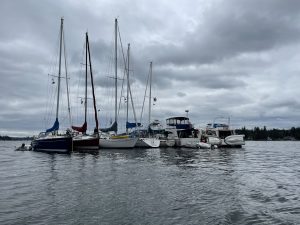 We had two back-to-back fireworks raft-ups in July, sans fireworks, in Liberty Bay and Blakely Harbor.  Unfortunately, there were no fireworks shows at either location as it appears the new fireworks bans around the region are making this a thing of the past.  We still had our raft-ups of club boats and guests, so we didn’t need the fireworks.  Just rafting up and socializing is reason enough to get together. I think this event will morph into something new in the coming years.  Please send me your ideas. 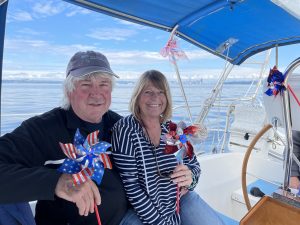 This year’s summer rendezvous was in the South Sound at Longbranch.  Many members were cruising Northern waters at this time, but we still had four boats raft up in Filucy Bay for this rendezvous!  It was disappointing that the dance hall on shore was not open for some onshore entertainment.  Those who attended enjoyed the South Sound cruising to, from, and at the rendezvous.

Earlier this month was the Labor Day cruise to Manzanita Bay.  We had four boats raft up in the bay for the weekend.  We had a strong south wind on Sunday with the two smaller of the four boats anchored to the south.  The fourth big boat that had just arrived on Sunday afternoon was too much for those anchors and the raft dragged at a good clip to the north toward other anchored boats.  We had to break up the raft and regroup to another spot deeper into the bay, while the other boats’ inhabitants watched us intently.  Once set again the wind died for the remainder of the weekend.  Monday morning, Roger Newby brought out his keyboard and serenaded the bay with his skilled piano playing.

I look forward to seeing you at our final cruise on October 1st in Des Moines.  I have enjoyed these past two years as your cruise chair.  It has been exciting getting the cruises going safely again as the pandemic somewhat subsides.  I could not have done it without all the club members who stepped up to sponsor the cruises.  Thank you so much Pat, Jerry, Katie, Jason, Barb, AJ, Jessie, Harold, Julie, Roger, Sharon, and Larry!

It is that wonderful time, again, where we get to nominate a new board to steer this ship for 2023. The nominating committee this year includes Matt Fraser, Roger Newby, and me, Katie Breitling. We are looking to fill most positions on the board this year. Have you ever thought about being a board member or interested in learning more about a position?

Feel free to reach out to Matt, Roger or me and we’d be happy to answer any questions. I think this will be an exciting year to be ‘at the helm’ of the club. We are looking to fill these positions, and maybe others: Secretary, Treasurer, Rear Commodore, Cruise Director, and Race Director.

I hope to hear from you soon, or else you just might hear from one of us.

Coming back from the summer hiatus, there is not much news to report on the racing front. The Transpuget race was early this year on August 20, 2022. Anne Girvin volunteered Jasper as the committee boat. The weather was great, and it was a good day to be on the water. The racing calendar this year has been packed, and with cruising also in full swing, there was a small turnout, only four boats.

The Snowbird series is coming up this winter, and should be an excellent time.

We are still looking for a new Race Chair for next year. If you are interested please let me, or anyone on the nominating committee, know soon. I will provide training through the Snowbird this year and be available to help next year.

The hunt for a new Race Chair has been difficult. Perhaps that is an indication that this is a good time to start the conversation about the future direction of the club. We have a long history of racing in the area, and racing has been an important part of our membership. At the current time our members are not doing much racing and we seem more focused on cruising. What does that mean for the future of racing in our club? Should we continue putting on races? Switch to a cruising only club? I do not have a good answer. That can also have implications on other areas of the club. The income from racing is about 30% of the club’s revenue, and allows us to do things, such as paying for a more elaborate June Dinner Dance. I, for one, would love to see the racing program continue, and plan to be involved again as my children get older.