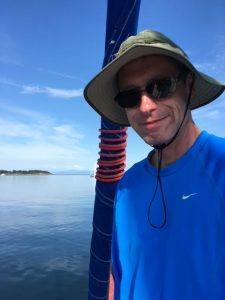 This is my first contribution to the Rudderpost as the new Commodore. I am excited to be working with you all this year to keep our great organization vibrant and growing. I am also looking forward to all the club events as Roger Newby takes the reins arranging the dinner meetings. We get to enjoy David Horn’s hard work as the outgoing Cruise Chair, setting up the 2023 cruise schedule, now to be managed by Julie Newby and David Rynning. Anne Girvin is already deep into the Snowbird series and has some great ideas to increase interest in the racing community as it relates to SBYC. With their help, and the rest of your board pitching in, it should be a great year.

I would like to thank our outgoing 2022 Board Members. David Horn’s willingness to take on both Commodore and a second year of Cruise Chair was greatly appreciated. Gene Laes and Katie Breitling toiled away as Rear Commidore and Secretary. Ben Lobaugh finished up several years as Race Chair, and Dennis Oelrich contributed often in his role of director at large. Rubie Johnson, Cory Williams, Barbara M. are staying on this year, although  not necessarily in the same roles.

Unfortunately, I have not been able to enjoy the boat much in the last few months. That is a bit ironic given that it is the activity that so much of the club revolves around. I have not been on the water in two months secondary to holiday obligations, really bad weather, a short trip to Oregon, and my general low energy during these short dark days. I checked on the boat this week and was happy not to discover any new leaks, although the lines are looking a bit moldy. Hopefully things will align in the near future and we can take advantage of a clear winter day for a sail. I am ok sailing in the cold, but draw the line at boating in the rain. To keep busy I am back to downhill skiing, and we have been spending time traveling locally, including the aforementioned road trip to Cannon Beach and weekends on Whidbey Island.

I often try to find a photo to include but there have been very few opportunities to capture a nautical subject this season. Julia and I have become occasional bird watchers and spent last weekend observing the short eared owls, eagles, and harrier hawks on Whidbey. Our wildlife photography skills are limited so I borrowed this shot from the Cornell University website. The owls are found near Crockett Lake and are unique in that they are active during the day and certainly worth seeking out if you are in the area. 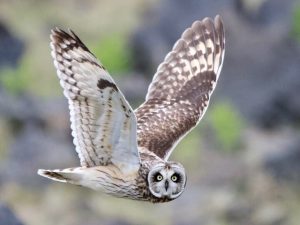 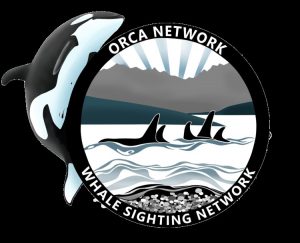 Orca Network’s “Share the Water” program is part of their Whale Sighting Network, which encourages anyone who sees a whale to report it via phone, Facebook, or email to sightings@orcanetwork.org. We also provide educational materials and presentations to marinas and boating groups to increase awareness about the types of whales that may be encountered in the Salish Sea, and regulations and best practices for boating in the presence of whales. Our “Whale Safe Boating in Puget Sound” program covers current regulations and guidelines, as well as tips for spotting and identifying different whale species.

Stephanie Raymond is a lifelong resident of the Salish Sea watershed and is passionate about sharing its wonders with others. She has been enamored of the Southern Resident Killer Whale population since she was six years old. Formerly People for Puget Sound’s education coordinator, she has been a marine naturalist and deckhand on board the San Juan Clipper for the past twelve years and is certified in basic keelboat by US Sailing. Stephanie is currently the program manager for Orca Network, a non-profit organization connecting whales and people in the Pacific Northwest. When she’s not actively looking for or talking about whales, Stephanie enjoys sailing, canoeing, and backpacking.

Please plan to join us Tuesday, January 17 at IVAR’s for an evening to include updates on the status of our Orca whales and tips/rules for how best to engage this delicate resource. I will be sending out the Evite very soon and would remind everyone again to indicate in your reply your dinner menu choice(s).  We have to get that information to IVAR’s the Friday before the event (January 13).  If you have to cancel a reservation, that can best be done by sending me an email directly (rogernewb@gmail.com) or calling me at 206-261-3790, but do so prior to Friday, January 13.  Cancellations after the 13th will incur a charge due to late cancellation. Same with no-shows on the evening of the 17th.  Our agreement with IVAR’s calls for a no-show dinner to still be paid for, so the Club asks each member to understand that and take responsibility for payment.  It doesn’t happen very often and we can sometimes get it handled outside that rule, but there are no guarantees on that.

We’re looking forward to a fun year in 2023, getting more “back to normal” with in-person dinner meetings and fun cruises! 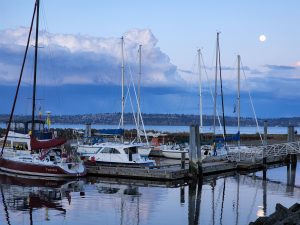 Happy New Year and welcome 2023! Our esteemed predecessor, David Horn, did a lot of the heavy lifting with this year’s arrangements, and has passed the baton to this year’s incoming Cruise Chair position, which is being shared by Julie Newby and David Rynning. We’re looking forward to seeing frie nds in person this year,  as the region continues to reopen for safe gatherings at our scheduled events.

Slip reservations have been made for Bell Harbor, Port Ludlow, Kingston, Port Orchard, and Poulsbo.
We’ll expand on the schedule below  with details in the February Rudderpost, but to kick things off – – the fun starts February 17-18 at Bell Harbor, with 10 slips reserved for Friday and Saturday on C dock. Call the marina office to book for your vessel anytime up to two weeks before the event. We invite someone to sponsor this, and to suggest and line up weekend activities. Attendance by boat may be iffy due to weather, but we hope that won’t prevent people from arriving by car. The Pier 66/Bell Harbor complex has covered garage parking and easy access to the marina, as well as to Anthony’s Pier 66 and Bell Street Diner. Bring your winter gear and stroll the waterfront, visit the Seattle Aquarium, or take the elevator or stairs up to explore the Pike Place Market and downtown Seattle. Watch for the Evite coming soon with contact details.

Below is the complete calendar of events; we’ll update as details emerge. We hope to see you, and we encourage anyone who’d like to sponsor Bell Harbor or the Burger Burn or the June Dinner Dance to contact us at cruisechair@shilsholebayyachtclub.org.

 Sponsor:  Michael Hoffman (for Blakely Harbor only)
 We could do one night in Liberty Bay, and the other in Blakely Harbor, like last year.

“It’s remarkable how quickly a good and favorable wind can sweep away the maddening frustrations of shore living.” —Ernest K. Gann 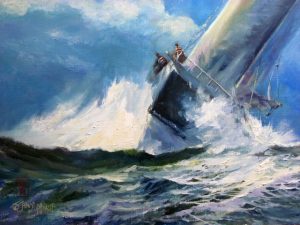 The Snowbird has had its first two races.  For the first race on November 19, the racers were sent to the Spring Beach/Meadows Point buoy, which they found was missing. Due to the missing buoy the race was declared a DNF and will not be used for standing.  Currently we have had over 40 racers sign up for the series and, hopefully, many more coming.

The next three Snowbird races will be on January 14, February 11 and March 18.  More people are needed for the committee boat, skippered by Jerry Hillis.  Volunteering on the committee  boat is a lot of fun and a great way of getting to know other club members.  If you are interested let me know: agirivn@comcast.net

The Transpuget race has been moved from its August date to September 30, hoping to attract more racers,  and lessen our competition with other clubs.  A possible theme could be women at the helm.  I would love all your ideas. 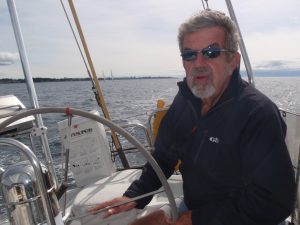 I am sad to share with you all that Mike Spear died on Dec 27, after battling cancer for the past few years.  He was a longtime member of SBYC, racer, and officer. Mike celebrated his 80th birthday in November surrounded by friends and family. Mike was very active in the club, eventually taking the helm as commodore in 2005. 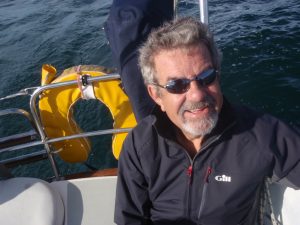 For many years he raced Sharkey, his Ranger 29. Mike was a formidable competitor in those early years as John Sterry, racing his Cal29 Bedford Lass, can attest. Many other club members will also remember racing against Sharkey during  Club, CYC, Whidbey Island race week and the Swiftsure  He went on to take the helm of Counterbalance (Frers 36), followed by Panic (J105), Alkahest (Tartan 42) and occasionally Malolo.  His booming voice and Poseidon-like presence were hard to miss at Yacht Club  dinner meetings. He was a very open person, willing to share feelings, beliefs, and perspectives with genuine interest and without judgement. He always found fun and humor in most everything. Racing aboard Heliotrope, a chartered Dufour 50 in Antigua, Mike donned a tie-dyed mumu-style dress. He  hadn’t lost weight yet, so he was an even lager  presence at the helm, and then he turned Avatar-blue when his dress started bleeding dye onto Mike and onto the deck. 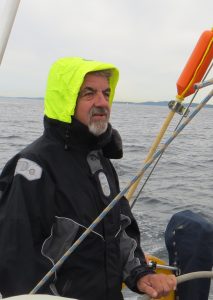 Mike liked to go FAST! As a younger man he raced cars. I raced on Alkahest with Mike in Puget Sound distance races and Swiftsures, where I saw Mike’s amazing ability to remain singularly focused on the helm for more hours than most of us can remain awake! It was early in my sailing adventures that Mike and I took Sharkey out on a blustery day off Shilshole, gusting well over 15 knots, with a pretty decent chop.  Mike calmly managed Sharkey’s tiller while he taught me to steer and control power of the boat with the mains’l.  We got into a groove going to weather that I’ve rarely shared with others, and I was hooked! 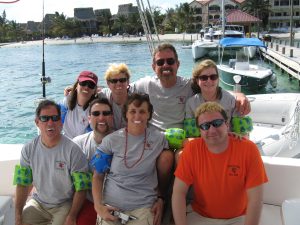 Mike taught me patience in a way I had not yet understood and still might not. He rarely got flustered or upset.  He always wanted the best for everyone, but make no mistake, he was a FIERCE competitor!  He challenged himself too, learning new techniques and skills, customizing boats, motorcycles, and later bicycle equipment. After a heart attack in 2008, he challenged himself again, taking on a healthier lifestyle of losing weight and turning to bicycling. Inspired by him, several of his pals joined in on the bicycling, including me. He then organized our first Seattle to Portland (STP) Ride in about 2009.  Mike lived in Bocas del Toro, Panama, for several years, becoming well known for his woodworking skills, his homemade bike trailer, and his ingenious invention of a boat lift built out of PVC tubes and a few valves. He successfully lifted a 20’ speedboat clear of the Caribbean waters in Panama, using just the power of domestic water line and a 12v battery controlling valve coordination.  He never quite turned it into a business venture but had a great time researching and testing. 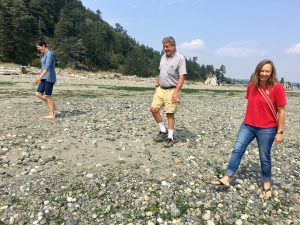 A recent Whidbey stroll with Shelly and Shawn.

He spent the last few years on Whidbey island, close to his eldest daughter, Shelly, and grandkids Corey and Sidney.  Mike’s other daughter, Jodi, lives in Seattle proper, so they were both able to be with him when he died.  As will not surprise those who knew him, Mike chose a “composting burial” to keep his particles in cosmic circulation. He also wanted to be remembered with a party and celebration and not a funeral ceremony. We will keep all posted on the Shilshole dock party aboard “Club” Malolo.  Mike lived a full and wonderful life, and as he put it, he was ready, but I will miss him deeply, as I know will others. Fair winds, my friend, we send you on with love. 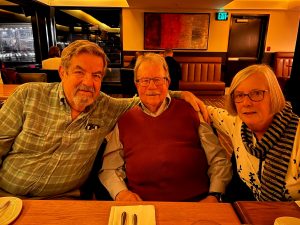